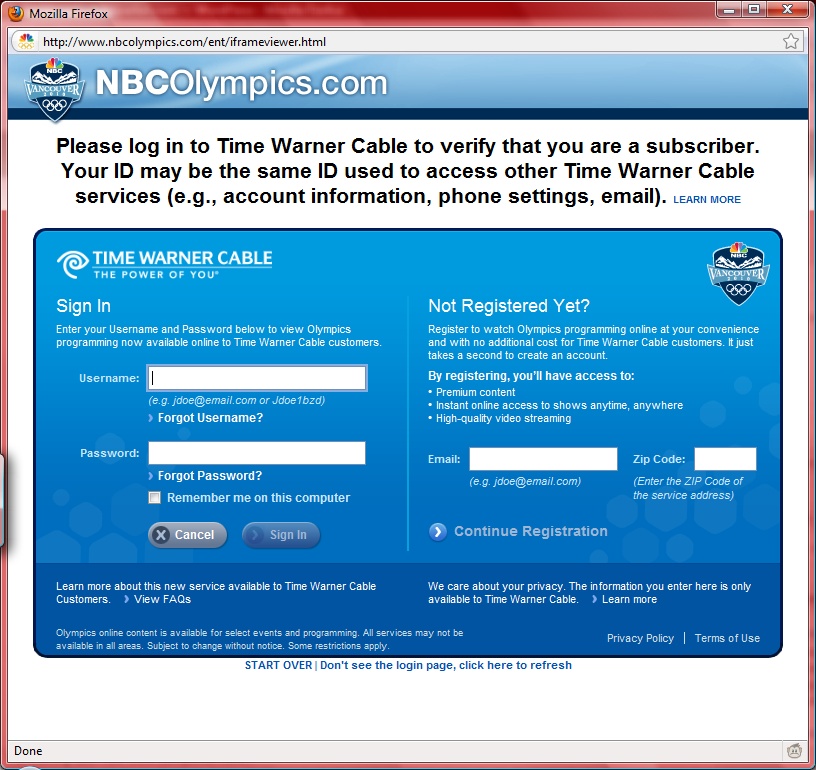 Why I won’t be watching the 2010 Olympics on NBC

I don’t spend much time watching television – actual television programming – at least not the old fashioned way.  With idiot-oriented shows like Jersey Shore and The Real Housewives of Whatever the F*ck dominating the televison landscape, I’ve pretty much lost my love for the good ol’ TV.  And just to be clear, if you watch either of these shows without the slightest sense of irony or disgust, then yes, you are an idiot.  You can quote me on that.

But we live in a modern world with all the conveniences of modern technology.  Online video services like Hulu and Youtube keep me entertained, and on a schedule that I determine.  I can watch what I want, when I want.  Everything should be so convenient.

So I was excited to see that NBC was providing coverage of the 2010 Olympic Games in Vancouver on their website.  This is the new media sort of thing I like to see big media companies embrace because it makes me feel like they actually give a damn about viewers like me.  I know they’re in it for the money, but at least I benefit a little bit.

Or at least I would, if I could register on NBC’s stupid website.

Sure, there’s plenty of video on www.nbcolympics.com.  I just can’t get to any of the video content I want to see.  For example, the opening ceremonies.  Instead of the immersive, action-packed, full-screen experience I should be seeing, I get this: 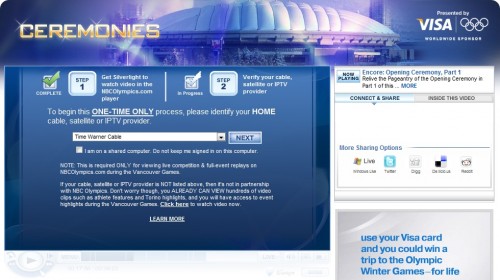 So now I have to install Silverlight.  Fine.  I’ll play your little game.  You could have just used Flash video like every other video website on the planet, but I’ll bend a little for the sake of technology.

Ok next step.  Now I have to identify my home cable provider?  What.  The.  F*ck.

The last time I checked, NBC was a nationally broadcast television network, not a syndicated cable network.  Why exactly do you need me to tell you who my cable provider is? Ok, maybe you have a contractual obligation to the local cable providers who carry your programming, so I’ll play along.  I’ll click the little button and jump through another virtual hoop so I can get my damned video. 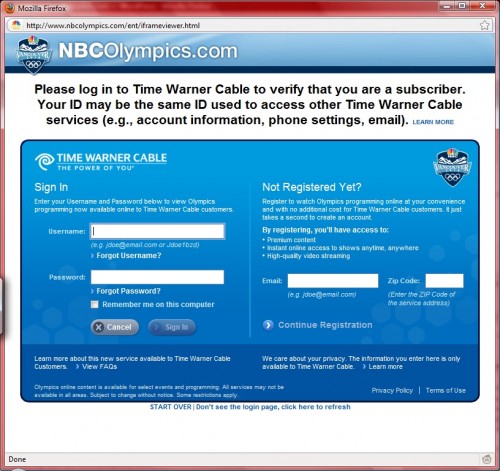 Now you want me to sign into my Time Warner account?  I don’t even know my account’s username because in the eight years I’ve been a Time Warner subscriber, I’ve never used it.  And I’m certainly not going to spend all day on the customer support line trying to get it just so I can watch videos on the Internet.

But since I’ve come this far, I will give you my email address and wait for my the registration message to show up in my email box.  And I did.  An hour ago.

You know what…it’s just not worth it to me.  All these steps and all this waiting is more than I’m willing to give.  I’ve already given you an hour of my life, just to watch a couple of minutes of the opening ceremonies. It’s your own fault really.  You could have made it easy, but instead you chose to put one barrier after another between your viewers and your content.  You should be ashamed.

But all is not lost.  It looks like I might watch the Olympics after all, and in high definition no less.  Just not on NBC.