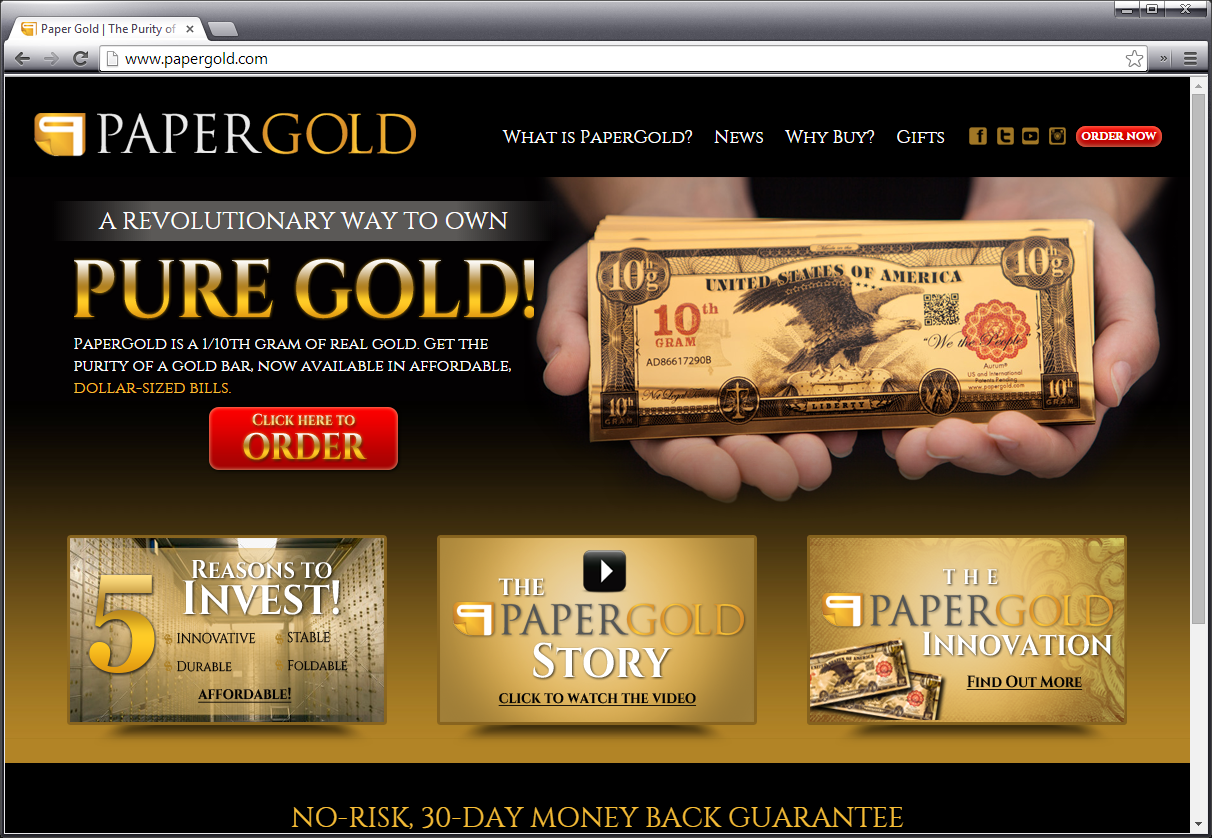 If you’ve spent enough time on Facebook, you may have seen an advertisement or promoted page for PaperGold, “pure gold–pressed into affordable, dollar-sized bills”.  It’s not actual currency – and they don’t claim that it is – but rather ornately decorated bills that each contain a carefully measured amount of real gold, 1/10th (0.10) gram to be precise.

Each of these PaperGold bills costs $10.00 (plus shipping), and the company talks at length about why you should purchase PaperGold as an investment or a gift.  It’s a unique approach, producing an easily stored and traded commodity with a certain amount of intrinsic value, and much of their website is dedicated to explaining the various reasons why gold is such a sound investment.  Of course an equal amount of space is dedicated to why PaperGold is a great way to start investing, describing it as “the smart man’s gold” and “gold made simple”.

As a gift I’ll admit there’s a certain novelty to PaperGold.  The bills themselves are quite attractive, printed with a dramatic eagle and various seals and currency-like imagery.  I can think of worse novelty gifts to give, and I’m sure I’ve wasted far more money on less useful things (pretty much everything ever purchased at The Sharper Image).

But as an investment, it’s a terrible deal.

Based on the current spot price of gold, that 1/10th gram contained in each of those bills is worth only around $3.89.  In other words, the price of gold would have to almost triple just to recover your initial investment.  Sure, you could argue that there are production costs involved in producing the PaperGold bills, but there are productions costs involved in producing gold bars and rounds, and they don’t carry a 200% premium over their actual value.  Moreover, a lot of gold buyers won’t bother with such trivial amounts because it’s just not worth their time, and they’re certainly not going to pay that premium if you ever decide to cash in your PaperGold “investment”. 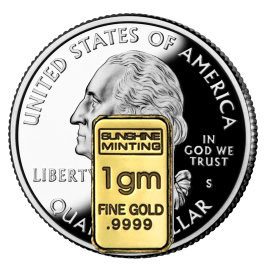 Another one of their touted “benefits” is that gold bullion is bulky to store and difficult to trade, whereas PaperGold can be stored and traded as conveniently as paper currency.  The problem with that argument is that a full gram of gold (1.0 gram bar) is only about the size of a Micro-SD card and carries with it a current value of around $38.90 depending on the manufacturer of the bar.  That’s about the cost of dinner for two at The Olive Garden, and anyone who’s seriously considering investing in commodities isn’t going to be put off by a $40.00 buy in.  You’ll need a stack of ten PaperGold bills to equal that amount of gold, and it’s going to cost you $100.00 to get it.  I think you can see where I’m going with this.